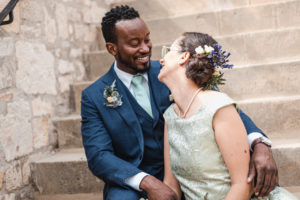 It has already been two month that we celebrated our wedding with us. We enjoyed the day very much and the two months afterwards passed in an instant. In the meantime we managed to get in touch to say thanks to (almost) all our guests and everyone who us their best wishes. And with the others we will get in touch shortly. But today we would like to share already our wedding clip with you that allows us to relive the moments.

The Wife & The Husband

Finally, we found the time to write our first real blog post on our wedding site. During the last weeks, we have been hunting down most of our wedding guests trying to make sure that everyone books their accommodation as soon as possible. Sorry for the pressure we put on you! We would like to reward your patience by sharing with you some history of our wedding location Schloss Neuenburg!

Neuenburg castle is built on the edge of a plateau overlooking the town of Freyburg on the East shore of the Unstrut river. The region has more than a thousand years of history in wine production, but this will be covered in a later blog post. 😉 Let’s start with some general history first!

Neuenburg means “new castle,” but the time when you could have called it a “new castle” has long passed. The castle dates back to the 11th century when Louis the Springer, count of Thuringia, commissioned the construction of the first buildings. These consisted of residential buildings, a unique Romanic chapel and a kitchen surrounded by strong walls and protected by large towers of an outer bailey.  It is not clear with regards to which castle the Neuenburg was considered to be the “new castle,” but one can assume that it might have been its famous sister castle Wartburg near Eisenach that had been founded earlier by Louis. Both castles were built to secure Louis’ territory: the Wartburg to the West and the Neuenburg to the East. Moreover, as such there was a time when it was the largest castle of the counts of Thuringia and it is until today one of Germany’s most significant medieval castles. Its walls surround 30,000 square meters which makes it three times larger than the Wartburg.

The history of the various construction phases and modernizations of the castle is closely connected to the history of Louis’ dynasty, the Ludovingians, that ruled Thuringia and Hesse from the 11th to the 13th century. Many prominent figures of the Middle Ages stayed here; among them Elizabeth of Thuringia (the Holy Elizabeth) or the legendary German Emperor Frederick Barbarossa.

However, the Neuenburg is more than a medieval castle (what we call “Burg” in German), it also is a palace (what we call “Schloss” in German).  Since the middle of the 16th century it had been transformed by August, Elector of Saxony, who used it as a hunting lodge. From 1656 to 1746 it was a secondary residence of the Duchy of Saxe-Weissenfels. Later Neuenburg castle was part of Prussian territory and was put under government conservatorship.

From 1970 to 1989 the castle buildings were closed to the public, and visitors could only visit the courtyards of the inner castle and the outer bailey. A private initiative finally saved the castle from decay and with the help of the state, it was renovated and transformed into the touristic attraction it is today. Since 1997 the Neuenburg belongs to the Art Foundation of Sachsen-Anhalt, and we are happy that the foundation rents the castle’s ballroom for wedding celebrations. The arrow in the drawing shows where exactly we are going to have our wedding celebration.

If you are interested in visiting the Neuenburg before the wedding celebration in the early afternoon, we are happy to arrange a tour for our wedding guests. Unfortunately, tours are available only in German, but we are trying to organize it in English for none German speakers. So let us know, what you think and if you want to explore the castle with us… 🙂

The Bride & the Groom

We are happy to finally invite you to our wedding for next August. We very much hope that you all received the invitation. Please let us know if you have any questions or comments. You can get in touch with us via this website or via our email mayaandfaisal@gmail.com. Via this blog we will update you regularly on the planning and give tips for the travel arrangements for those travelling from overseas.

We use cookies to ensure that we give you the best experience on our website. If you continue to use this site we will assume that you are happy with it.OkNoPrivacy policy